Warning: "continue" targeting switch is equivalent to "break". Did you mean to use "continue 2"? in /homepages/14/d290862146/htdocs/2017/toulouse/wp-content/plugins/revslider/includes/operations.class.php on line 2254

Warning: "continue" targeting switch is equivalent to "break". Did you mean to use "continue 2"? in /homepages/14/d290862146/htdocs/2017/toulouse/wp-content/plugins/revslider/includes/operations.class.php on line 2258

Warning: "continue" targeting switch is equivalent to "break". Did you mean to use "continue 2"? in /homepages/14/d290862146/htdocs/2017/toulouse/wp-content/plugins/revslider/includes/output.class.php on line 2931

Florence Encrevé is an Associate Professor in linguistics at the University Paris 8 (France) and a member of the research team ‘Sign Language and Gestuality’ at the linguistics laboratory « Structures Formelles du Langage » (UMR 7023) since 2013. She is a qualified sign language interpreter since 2000, and PhD in History since 2008. Jointly (with Brigitte Garcia) she coordinates the Master degree program in sign language interpreting at the University Paris 8. She is a co-founder of the AFILS’s French scientific journal ‘Double sens’ (with Sandrine Burgat) since 2014. Her research focuses are LSF/French interpreting and translating, didactics of LSF/French interpreting and translating, history of sign language, deaf and LSF/French interpreting in the 18th-20th centuries. Her main publications are ‘Les sourds dans la société française au XIXe siècle. Idée de progrès et langue des signes’ [Deaf in French society in the 19th century. Idea of progress and sign language], Grâne: Créaphis, 2012; ‘L’interprétation en langue des signes’ [Sign language interpreting], Paris: Presses universitaires de France, 2007 (with Alexandre Bernard and Francis Jeggli). 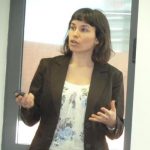 Gemma Barberà (Ph.D.) is a lecturer of sign language grammar and interpreting at the Faculty of Translation and Interpretation at Universitat Pompeu Fabra (Barcelona) since 2015. She earned her PhD in Sign Language discourse in 2012, with a thesis investigating the role of spatial locations in the grammar and the discourse of Catalan Sign Language, which resulted in the publication The meaning of space in sign language (De Gruyter Mouton and Ishara Press). She holds a Master degree in Cognitive Science and Language (2007) and has a background in Translation and Interpretation (BA in 2001). Dr. Barberà has been teaching sign language linguistics and sign language interpreting since 2004 at different national and international institutions and at different degree levels. She was a member of the committees that designed the structure and implementation of the BA degrees (Translation and Interpreting and Applied Languages), within which LSC is taught at UPF. She is the coordinator of the first reference corpus project of LSC, which consists in the collection, editing, annotation and online dissemination of data of different native signers from all over Catalonia. She is also the coordinator of the project CREA-LSC, a centre of reference of online resources that will constitute a pioneering virtual space supplied with specialized resources, experimental research and instructional materials on LSC.
Professional website: https://gemmabarbera.wordpress.com

Yann Cantin, historian, is a lecturer at the University of Paris 8, in the “Laboratoire Structures Formelles du Langage,” where he works on the deaf French community, his origins, and especially on the history of french sign language. His works mainly concern the eighteenth, nineteenth and early twentieth centuries. He has also been teaching conference interpretation since 2003, from French to the LSF, where he tackles the issue of the meaning of terms in both languages.

Martin Chapuis is a French-sign language interpreter (Swiss Federation of the Deaf, Fondation procom, Radio Télévision Suisse). He is also a member of the Scientific Committee for the Training of Sign Language Interpreter at the EESP in Lausanne and was responsible for the training of interpreters in sign language, School of interpretation and translation (ETI), University of Geneva. 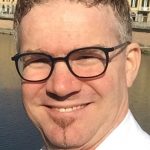 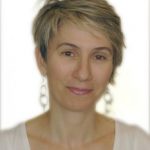 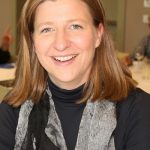 Dorijana Kavčić is currently attending a PhD program at Faculty of Humanities and Social Sciences, University of Zagreb, linguistics department, with special interest in language acquisition of the Deaf and reciprocal influences between sign language and spoken language. She is involved in organizing and holding public academic lectures arising awareness of Croatian Sign Language and the Culture of the Deaf. Also, she is conducting Croatian Sign Language teaching programs, organizing and implementing various teaching methodologies. As an employee of Deaf and Hard of Hearing Association Zagreb, she is a Croatian Sign Language interpreter working in variety of settings such as medical, judiciary, educational, government, TV broadcasting and conferences. Most recently, she has been involved in a pilot project of Closed Captioning at National Croatian Television, in methodology implementation and as language advisor. 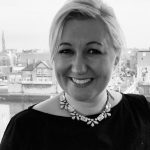 Dr. Lorraine Leeson is Ireland’s inaugural Professor of Deaf Studies. She serves as Director of Research at the School of Linguistic, Speech and Communication Sciences, Trinity College Dublin (University of Dublin) and Co-Director of the College’s Centre for Deaf Studies. Her research work focuses on the linguistics and applied linguistics of sign languages, including interpreting studies. She has engaged in pan-European research work with academic institutions, Deaf communities and interpreting organisations for over 25 years: current projects include “DESIGNS” (Erasmus+), which focuses on deaf graduates’ access to employment and “Promoting Excellence in Sign Language Instruction” (European Centre for Modern Languages). In 2008, she was named European Language Ambassador for her work. Lorraine has been an interpreter for over 20 years and is Co-Chair of the European Forum of Sign Language Interpreters Committee of Experts. She co-authored “Sign Language in Action” with Prof. Jemina Napier (Palgrave, 2016), and is co-author of the International Association for Translation and Intercultural Studies (IATIS) Yearbook, “Interpreting and the Politics of Recognition” with Dr. Christopher Stone (Routledge, 2017). 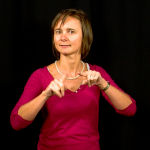 Laurence Meurant is Research Associate for the F.R.S-FNRS at the Faculty of Arts of the University of Namur (Belgium). She is head of the Laboratory of French-Belgian Sign Language (LSFB-Lab) where, since 2012, 11 people are involved in Sign Language linguistics research and applied research. Her research focuses on the linguistic description of the French Belgian Sign Language (LSFB): morphology, syntax, enunciation, discourse; on contrastive linguistics: French – LSFB; and on linguistic issues of education in context of bilingual (Spoken – Sign Language) learning. Principal investigator of the F.R.S-FNRS Incentive Grant for Scientific research – M.I.S. “Corpus LSFB” (2012-2015), she has collected the first digital open access corpus of movies and annotations of French Belgian Sign Language (www.corpus-lsfb.be). She develops the pioneering discourse and corpus based studies in LSFB. 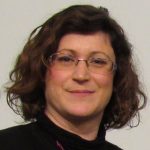 Giulia Petitta, PhD, is an Italian Sign Language interpreter and linguist. She conducted research both on spoken and signed languages, with focus on discourse analysis, corpus linguistics, written representation, translation and simultaneous interpretation. After her PhD (2011), she worked for different academic institutions in Europe and the USA, and has been involved in several research projects. She has served as Lazio Regional Representative of the Italian Association of Professional Sign Language Interpreters, ANIOS, between 2013 adn 2016. Dr. Petitta is currently investigating language attitude in the Deaf communities in Europe and USA, with a focus on the linguistic background of sign language teachers and interpreters. 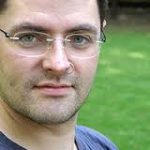 Christopher Stone, PhD, joined the Department of Interpretation at Gallaudet University during the spring of 2013 as an Associate Professor. He earned his PhD in Sign Language Interpreting from the University of Bristol (2006) where he researched Deaf translators working within television news rendering English into British Sign Language, which resulted in his publication of ‘Towards a Deaf Translation Norm’ (Gallaudet University Press 2009). Dr Stone is currently in receipt of a Spencer Foundation grant for the project “The development of Deaf legal discourse,” which examines the use of ASL by Deaf lawyers. He has explored (with Dr. Robert Adam and Dr. Breda Carty) Deaf people working as translators and interpreters within the Deaf community and at the institutional interface. He is also studying Deaf/nonDeaf interpreting teams in international conference settings with Dr. Debra Russell. His first postdoctoral research post was based at the Deafness Cognition and Language (DCAL) research centre, University College, London, undertaking a longitudinal study examining predictors for sign language learning and sign language interpreter aptitude, which he is currently completing.