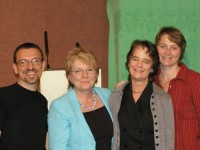 In 1987, a conference was held in Albi (France) which examined Sign Language Interpreting in an European context; this was organised under the auspices of the French Association of the Deaf in conjunction with the European Community Regional Secretariat of the World Federation of the Deaf (known today as European Union of the Deaf), and was the first time interpreters had the opportunity to met together to formally examine issues of importance to them.

We will do it!

Subsequently, a group of European Sign Language Interpreters who where working together at the WFD Congress in Finland (1987) agreed, with the support of the ECRS, to held the first “efsli” seminar which was organised in Glasgow (Scotland) in 1988. At this meeting a series of resolutions were agreed to be used as framework for the future meetings. This informal group met again in 1990 in Lisbon (Portugal), 1990 Athens (Greece), 1991 Brussels (Belgium) and 1991 in Hamburg (Germany).
At this stage, efsli was an informal group. However, it became clear that in order to put the work of efsli on a more formal foundation and to seek financial support, the organisation had to become properly constituted, with agreed regulations.

In Brussels (Belgium), at the end of August 1993, the first efsli Constitution was ratified and the Board members elected. One of the important conditions, at that time, was that Board members could represent different regions of Europe. The Officers elected at this first official efsli meeting were:

The first Seminar was held in 1994, in Edinburgh (Scotland), following the Annual General Meeting (AGM). The theme of the seminar was “Working Conditions”. Support was provided by the Commission of the European Communities – Integration of Disabled People and the Helios II programme (a community action programme for Disabled Europeans Citizens who are living independently in an open society) as well as the continuing support by EUD. In 1997 all the European financial support ended.

The aim of efsli has always been to provide a forum for discussion and information sharing amongst its members and interpreters at large. Therefore, every year, following the AGM, an efsli seminar or conference has been organised that includes participants from all European nations and guests from all over the world.